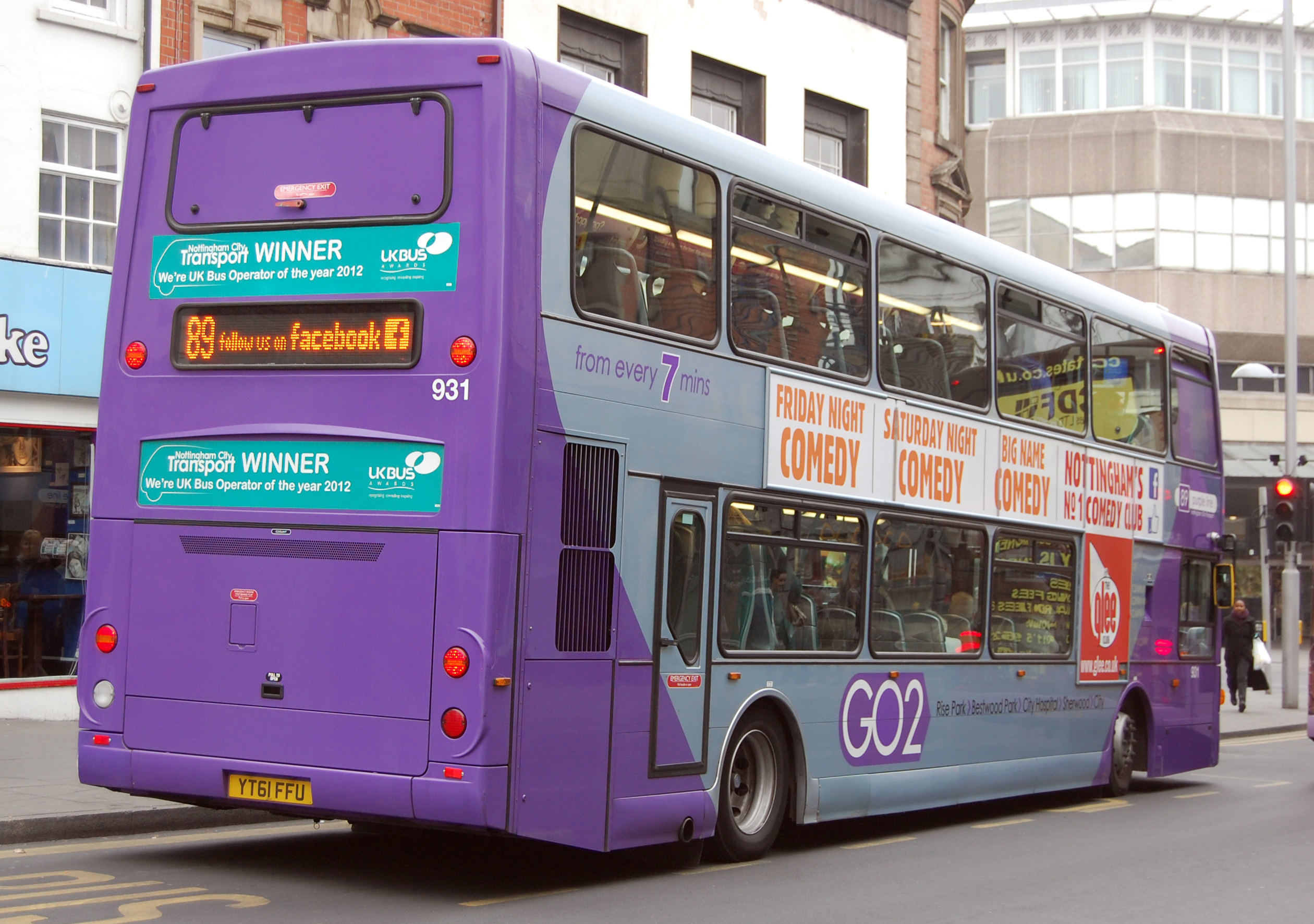 One of Nottingham’s GPS-enabled real-time bus information displays. Nottingham has the largest network of real-time information-enabled infrastructure outside of London.

As you’ll no doubt have heard, NCT boasts outstanding customer satisfaction survey results. In the most recent Passenger Focus survey, 95% of NCT passengers in Nottinghamshire expressed overall service satisfaction (against an 84% average across the entire survey).

So, we ask, what exactly is driving these results?

“It’s a reflection of our investment, built up over the years”, says Anthony. That investment has been significant – in vehicles, network frequencies and in the ongoing implementation of one of the country’s most widespread real-time tracking and GPS systems, to name a few.

To understand recent successes, however, we must firstly travel back in time to the year 2001. Prior to the turn of the century, Nottingham’s council-owned bus operations were in a very different shape. Bus passenger numbers in Nottingham were mired in a 50-year downward spiral, which at the time, looked like a freefall which was all but impossible to reverse. Nottingham’s bus network consisted mainly of cross-city routes, many travelling north-south and traversing the crowded city centre. Drastic action needed to be taken to reverse the continuing out-of-control decline in numbers. The result was the curtailing of cross-city routes, and the creation of two brand new networks in the city – ‘Go2’ and the ‘Nottingham Network’.  “Trying to explain to passengers in the south of the city that their bus was delayed because it was stuck in Arnold (north of the city) was becoming difficult”, remarks Anthony. Almost overnight, routes in the city were cut, changed, re-routed, renumbered and colour coded in a massive programme of investment – a programme so big, in fact, that the first phase wasn’t deemed complete until 2004.

This is the period during which NCT began to concentrate efforts on changing perceptions of bus travel in the city. Go2 saw the introduction of an ‘every 10 minutes or less’ policy on core routes, which were to be easily identified by their vibrant colour coding – a significant (and somewhat controversial with City residents) change from its prior vast fleet of elderly green and cream vehicles. Previously, NCT bus routes and timings had been designed around “what worked well for the managers and the drivers, rather than the customer – services ended at 11pm so that everybody could go home before midnight” reflects Anthony. “With Go2 and the Network, routes and timetables were completely overhauled based on feedback from customers”.

NCT made a conscious choice in adopting the ‘network’ strategy – in Anthony’s words, “we couldn’t go for all-out route ‘branding’ due to the nature of the places we serve!”. Unlike examples of route specific branding by other operators, which sought to position individual routes as stand-alone brands, NCT’s strategy was to create a cohesive network of routes, serving all areas of the city with typically one change in the city centre. “There aren’t many corners of the city you can’t reach on the Network’ remarks Anthony. There’s an argument for and against both of these types of branding – stand alone branding is typically most effective on inter-urban routes which serve many towns and cities, and network identities work well in cities and other heavily populated areas. First UK Bus’s now all-but-defunct Overground and Trent Barton’s i4 are classic examples of the two different branding styles, and both have worked equally as well in their respective domains.

Sustained heavy investment in vehicles alongside the branding programme sparked in 2001 continues to the present day. NCT successfully built up a great relationship with vehicle body-makers East Lancashire Coachbuilders (ELC), and took many vehicles on ELC bodies with both Dennis and Scania chassis. The best evidence of this partnership remained up until 2012, with ELC (now owned by Optare) continuing to produce its OmniDekka vehicles on Scania chassis solely for NCT. OmniDekkas far outnumber any other bus types in Nottingham – however, the partnership now looks to be all but dead in the water, with ELC/Scania putting production to an end, forcing NCT to evoke a switch in policy to Alexander Dennis products. After a competitive tendering process, NCT took its first batch of 10 ADL Enviro 200 midibuses in early 2013, with more due later in the year. And, in March, it was also announced that NCT had ordered a batch of ADL Enviro 400 double deckers, on Scania N230UD chassis. “We’ve built up a great relationship over the years with Scania”, notes Anthony. The Enviro 400s will be full-height examples – most Enviro 400s in the UK are built as low-height vehicles. As with all of its deliveries over the past couple of years, NCT has opted for high-specification vehicles, with high-backed leather seating, drivers air conditioning and on-board real-time information specified as standard. In total, 73 new vehicles will be delivered to NCT in 2013.

Increased frequencies, new vehicles and colour coding however, as all-singing and all-dancing as they are, simply aren’t enough on their own to tempt people from their cars. As such, NCT has invested heavily into GPS and real-time tracking systems over the past decade, together with the City and County Councils and other local operators. Indeed, Nottingham now enjoys the largest coverage of at-stop and on-board real-time information systems outside of London. And some of the expertise did actually come from the Capital itself – being 18% owned by Transdev (which in turn previously owned London United), NCT benefited by learning from experience – taking the opportunity to evaluate London’s iBus and other real-time information systems. Eventually, NCT settled on using INIT systems – some of the benefits offered by INIT include integrated ticket machines, web and app APIs and the ability to interact with roadside equipment – all of which have had a positive impact on passenger numbers. “Customers themselves have told us that they are far more likely to use the bus when they can see exactly when it’s going to turn up, rather than waiting around in the cold!”, Anthony notes. Other INIT features which NCT uses advantageously are two-way voice and text communications with vehicles – and in the future, automated instructions will be sent to drivers – for example, if running ahead of schedule, INIT will automatically tell a driver to wait at the next stop for the instruction to proceed!

So, has NCT’s investment worked? Do people in Nottingham really now choose to leave their cars at home and take the bus? Passenger numbers and satisfaction scores certainly seem to suggest that they really do – NCT has seen year-on-year increases every year (except in 2007/8, when the recession hit) since 2001. Nottingham is now the least car-reliant city in the UK (with the exception of London). It’s worth noting, however, that NCT hasn’t managed this alone. NCT shares its goal of encouraging people to use public transport with the other major operator in Nottingham – trent barton. The two companies, although competitors in the city area, share a vision of driving passenger numbers up even further over the coming years through heavy investment in quality. Nottingham is a shining example of how attractive vehicles, robust infrastructure and a focus on providing trustworthy and reliable customer service can combine to produce impressive results. The city’s transport network is a model for success, and demonstrates exactly what can be achieved simply by listening to customers and acting accordingly. The figures speak for themselves.

What do you think makes a good bus service? Have you ditched the car for the bus? Tweet us – @transportdsn.