Alexander Dennis stole the show at Coach and Bus Live 2015 with the launch of the E400H City.

Day one of Coach and Bus Live 2015 at the NEC (30 September) was all about ADL, as it unveiled its New Routemaster-inspired Enviro 400H City, designed and built entirely with London in mind. On display was the first of 19 new hybrid vehicles for Arriva London’s Route 78 (Shoreditch High Street Station – St Mary’s Road). The new bus builds on the Enviro 400MMC introduced in Spring 2014, and the first E400H Citys will be 10.4metre dual door examples, featuring the proven Cummins 4-cylinder, 4.5 litre iSBe engine. ADL have given the City what they term the ‘London look’, with asymmetrical sloping windscreen, glazed staircase and large wraparound windows. It’s a clear, unashamed rip-off of the New Routemaster, and squarely aims to offer an alternative to the opinion-splitting Wright vehicle. And what of the rest?

ADL also exhibited one of 10 new stunning Plaxton Elite-bodied Volvo B11R Euro 6 coaches for Trent Barton’s popular Red Arrow services, pictured below, and an Enviro 200 single decker. The 14metre tri-axle Elite almost threatened to surpass the E400H City in terms of ‘stage presence’ – the incredible Best Impressions-designed livery literally commanded heads to turn! The distinctive profile of the Elite (apparently taking inspiration from the pods of the London Eye) has really been brought to life with the Red Arrow branding. In addition to head-turning beauty, the Elite demonstrated practicality, having been fitted with a step-mounted wheelchair lift at the front entrance. 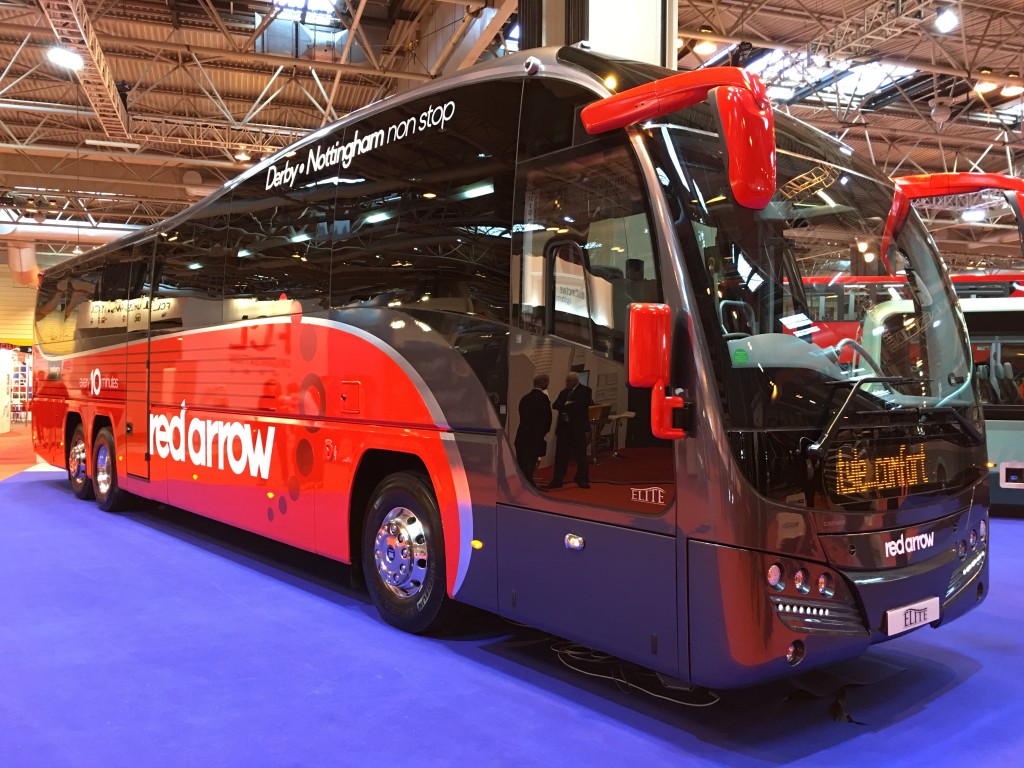 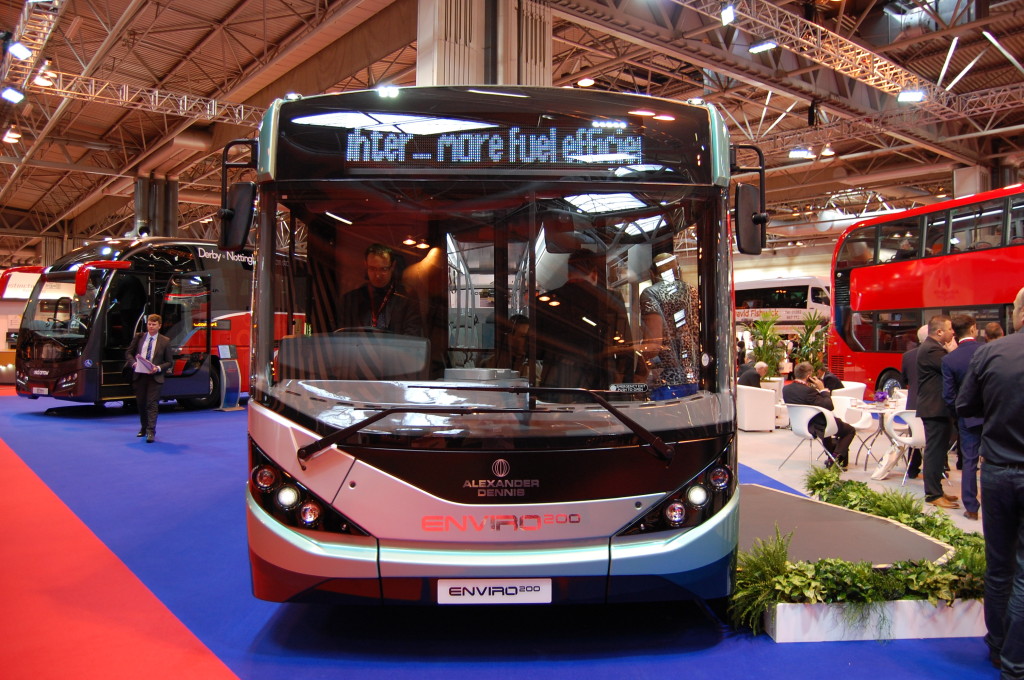 Wright on form with the Gemini 3

Wrightbus’s Streetlite DF (Door Forward) featured alongside a Gemini 3-bodied Volvo B5LH for Go-Ahead London General. In contrast with the Enviro 400H City, with its uncomplicated rear lower deck seating setup and flat floor, the Gemini/Volvo B5LH combination makes for an awkward and complex seating arrangement at the back, somewhat reminiscent of an M.C. Escher painting. That said however, the rest of the vehicle proves itself as a worthy competitor to the E400 – bright strip lighting and Go-Ahead’s lively interior combining to make the vehicle appear cavernous, particularly on the lower deck. 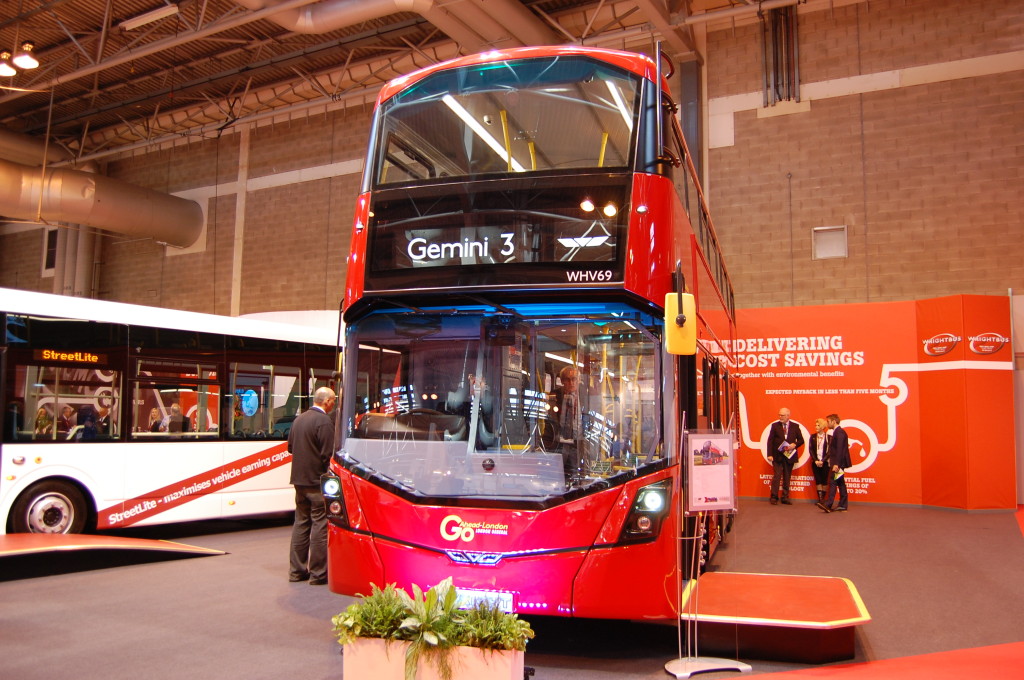 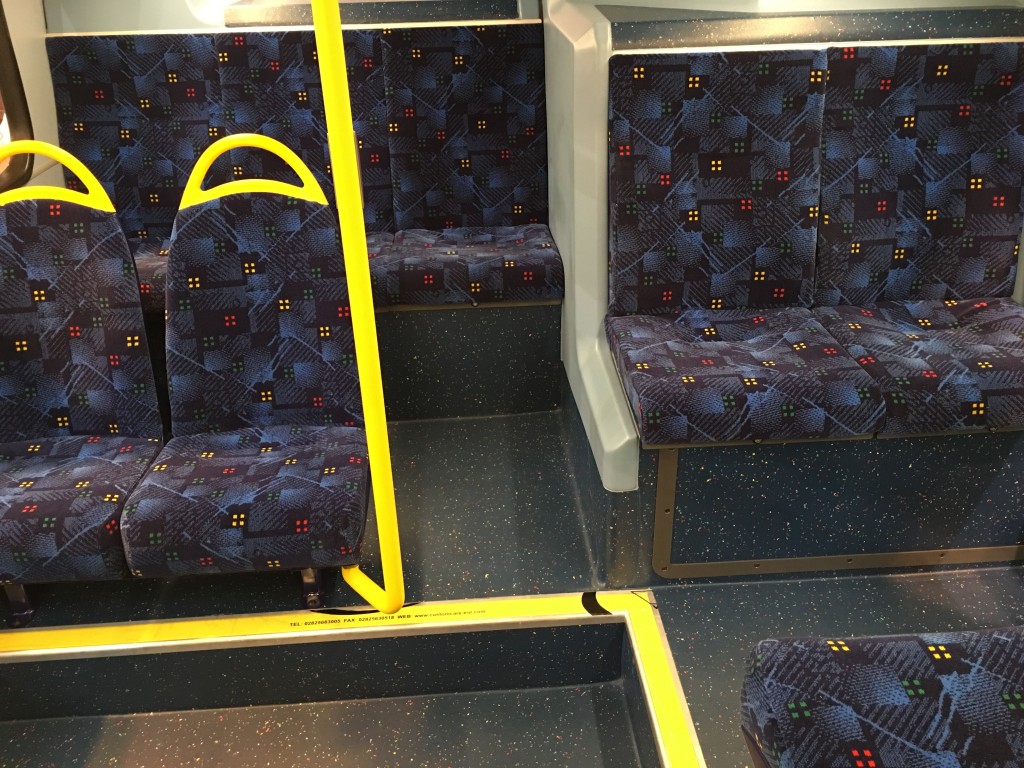 All things bright and beautiful…

Both the ADL and Wright double deckers contrasted again with Optare’s offering. Optare brought along one of its new Metrodecker vehicles in Yorkshire Tiger livery, which it displayed alongside a low-carbon Solo and an electric MetroCity EV, both for London. The Metrodecker integral is powered by a compact, twin-turbo, 5.1 litre Mercedes engine, and manages to feature a completely flat lower deck, whilst boasting impressively bright, airy interiors on both decks. The saloons are incredibly clutter-free, and the all-round visibility from the top deck is particularly impressive. 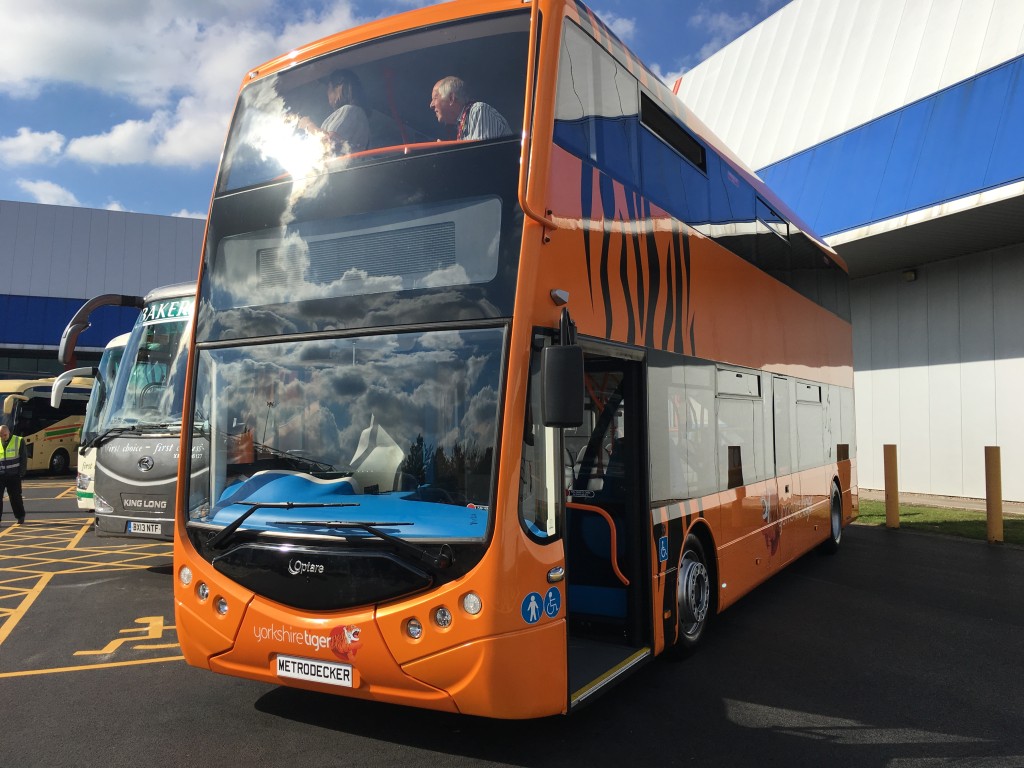 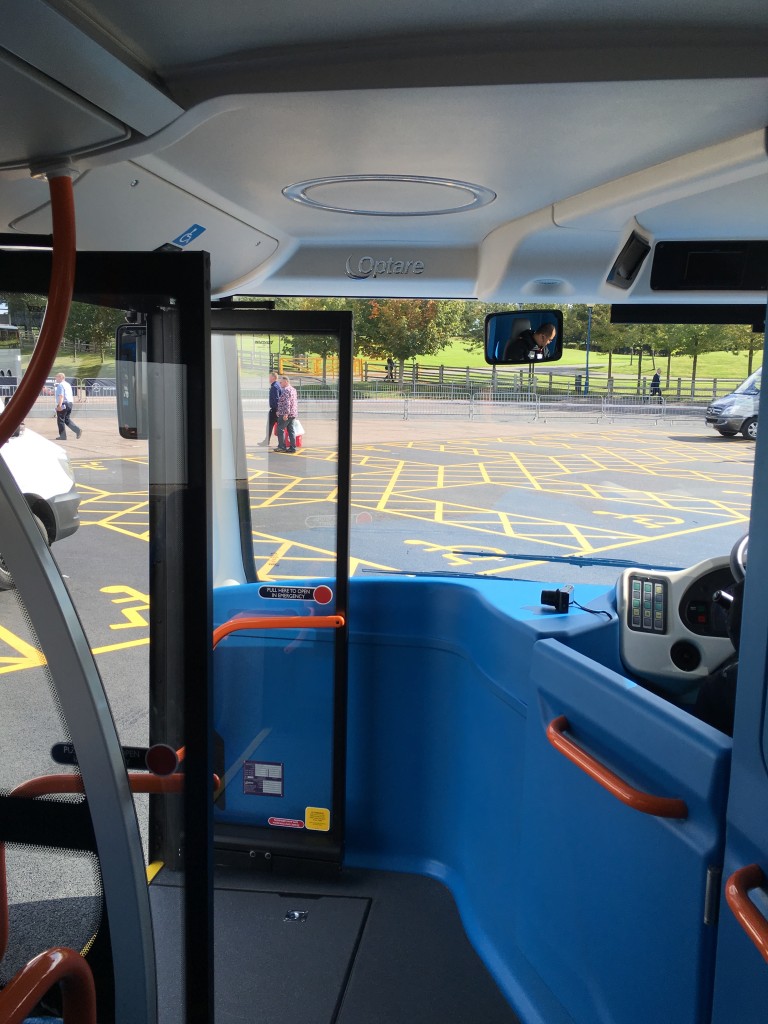 The uncluttered entrance of the Optare Metrodecker 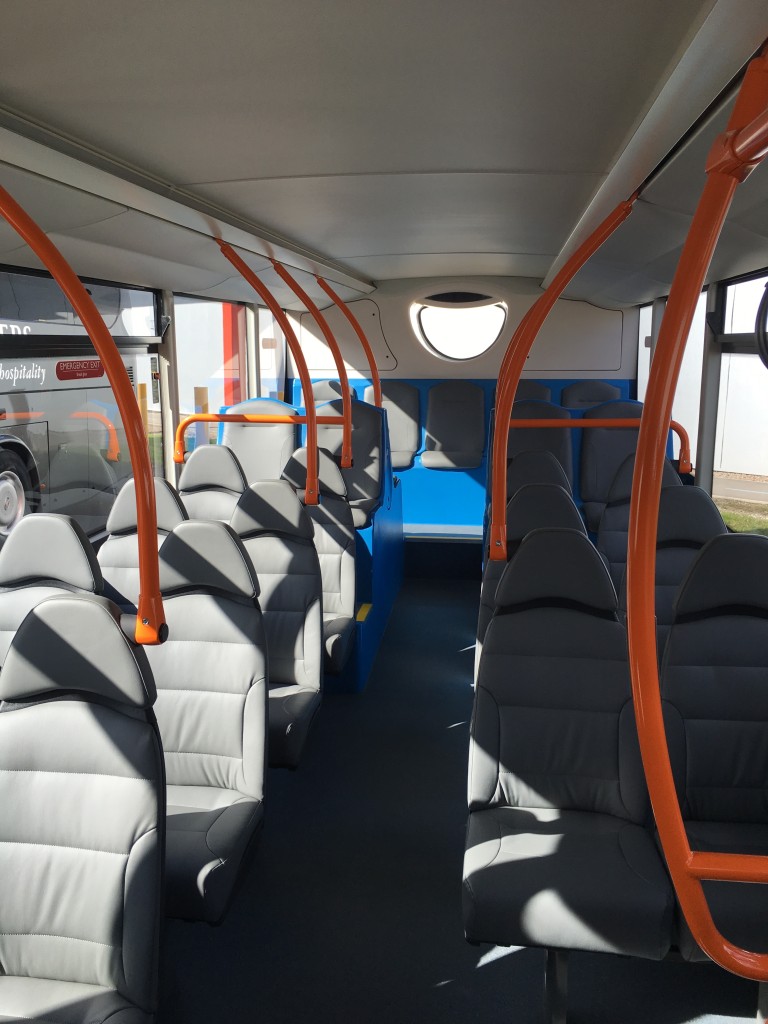 Facing the rear of the Metrodecker interior; note the step-free aisle

…all coaches great and small…!

A number of coaches, from full size to medium and midi, were exhibited at the event as usual. Of particular note was the Ferqui F5 for Bessway Travel, an unusual-looking vehicle bodied by Spanish coachbuilder Ferqui, built on Mercedes-Benz Atego 1224L chassis. Curiously, the F5 is billed as a ‘luxury 34-38 seater’ – a somewhat strange description to apply to what is actually a pretty bog-standard vehicle, both inside and out. Compared to the other vehicles in roughly the same size bracket on display (Plaxton’s Cheetah, Unvi’s Voyager GT amongst others), the F5 unfortunately lacks woefully in both style and presence. 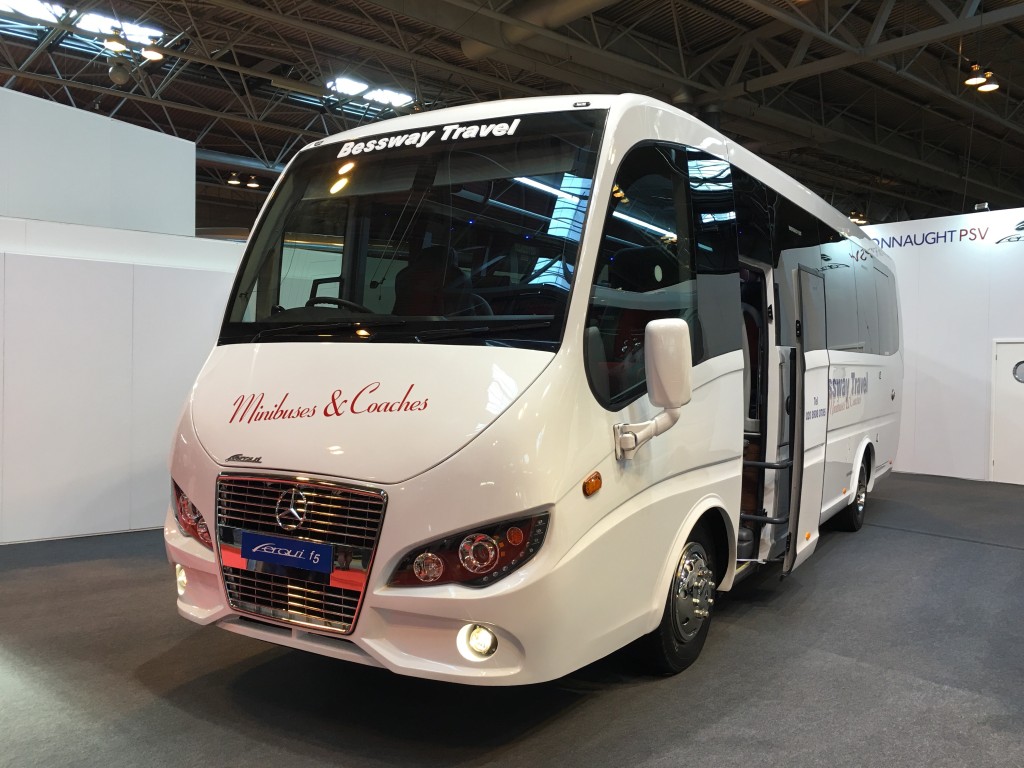 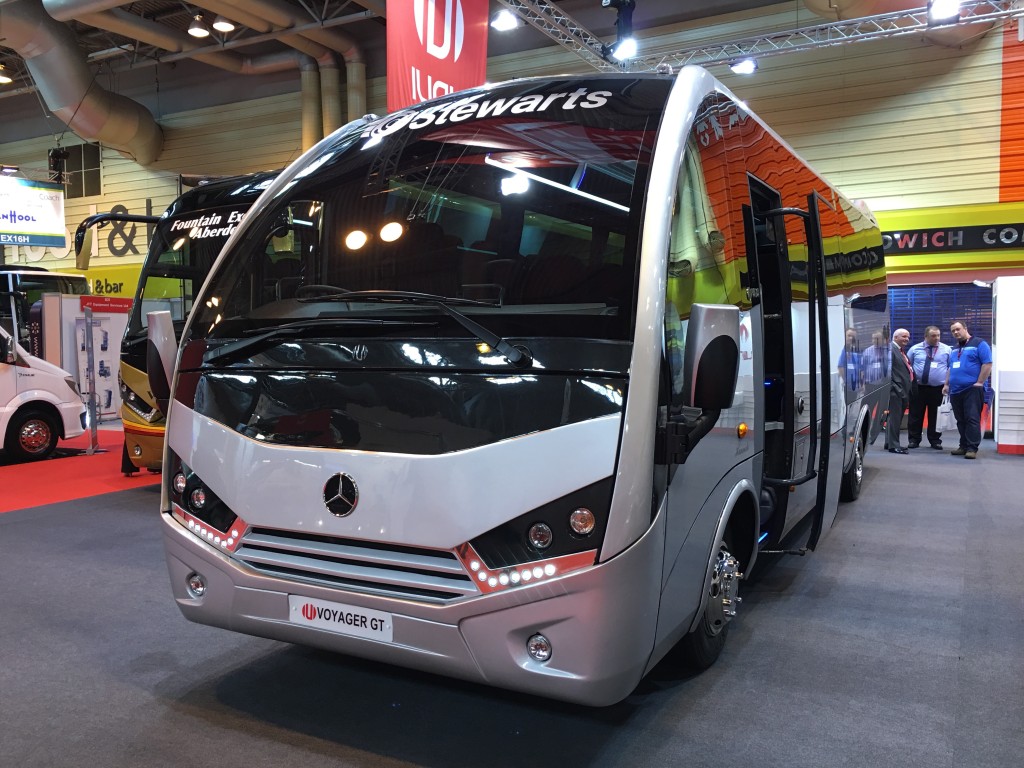 Full size coaches were of course in abundance, with a number of vehicles of particular interest in addition to the Elite for Trent Barton. Models from Irizar, MAN, King Long, Volvo, VanHool and the Chinese manufacturer Yutong. On show from Yutong were the integral TC12 and smaller TC9 models, both unremarkable in appearance from the outside but boasting very attractive and well-presented interiors, more than capable of holding their own against the European competition. And speaking of the European competition…Irizar’s i6 model stood out as a particularly tidy-looking vehicle, particularly on the inside; bright, airy, and featuring a particularly spacious entrance doorway – practically cavernous.

Well this is quite nice! Evidence of yet more LEDs on board the Yutong TC12 #coach_buslive2015 pic.twitter.com/29JmTPR6Fu 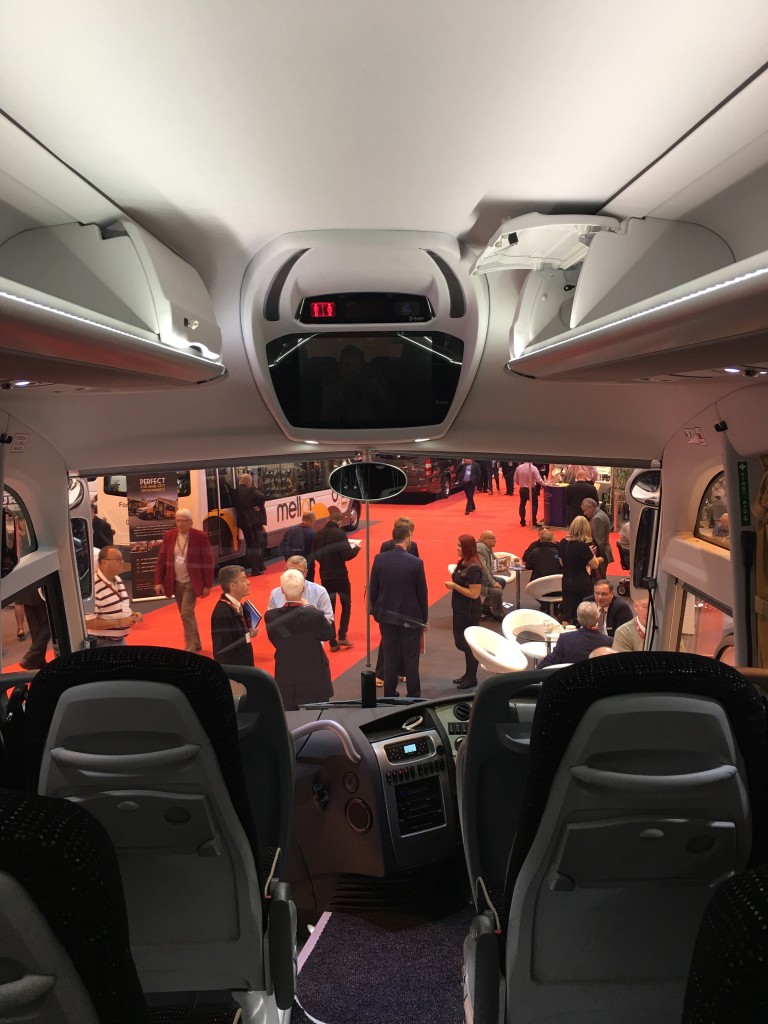 So, that’s it from Transport Designed today. Coach and Bus Live 2015 was a fantastic opportunity to get to grips with some of the latest design trends and technical innovations in the industry – LEDs, asymmetrical windscreens, e-leather and smaller Euro 6 drivelines in abundance.

Catch up with the rest of the action on Twitter – @transportdsn, or leave your thoughts about the show in the comments below.

PS – Day two of Coach and Bus Live takes place tomorrow, 1 October – unfortunately we can’t be there, but will be following the action online! 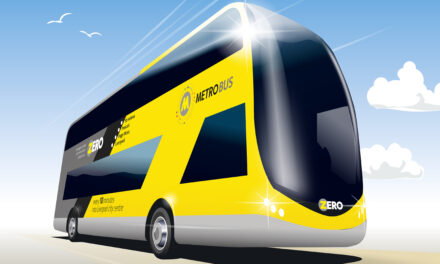