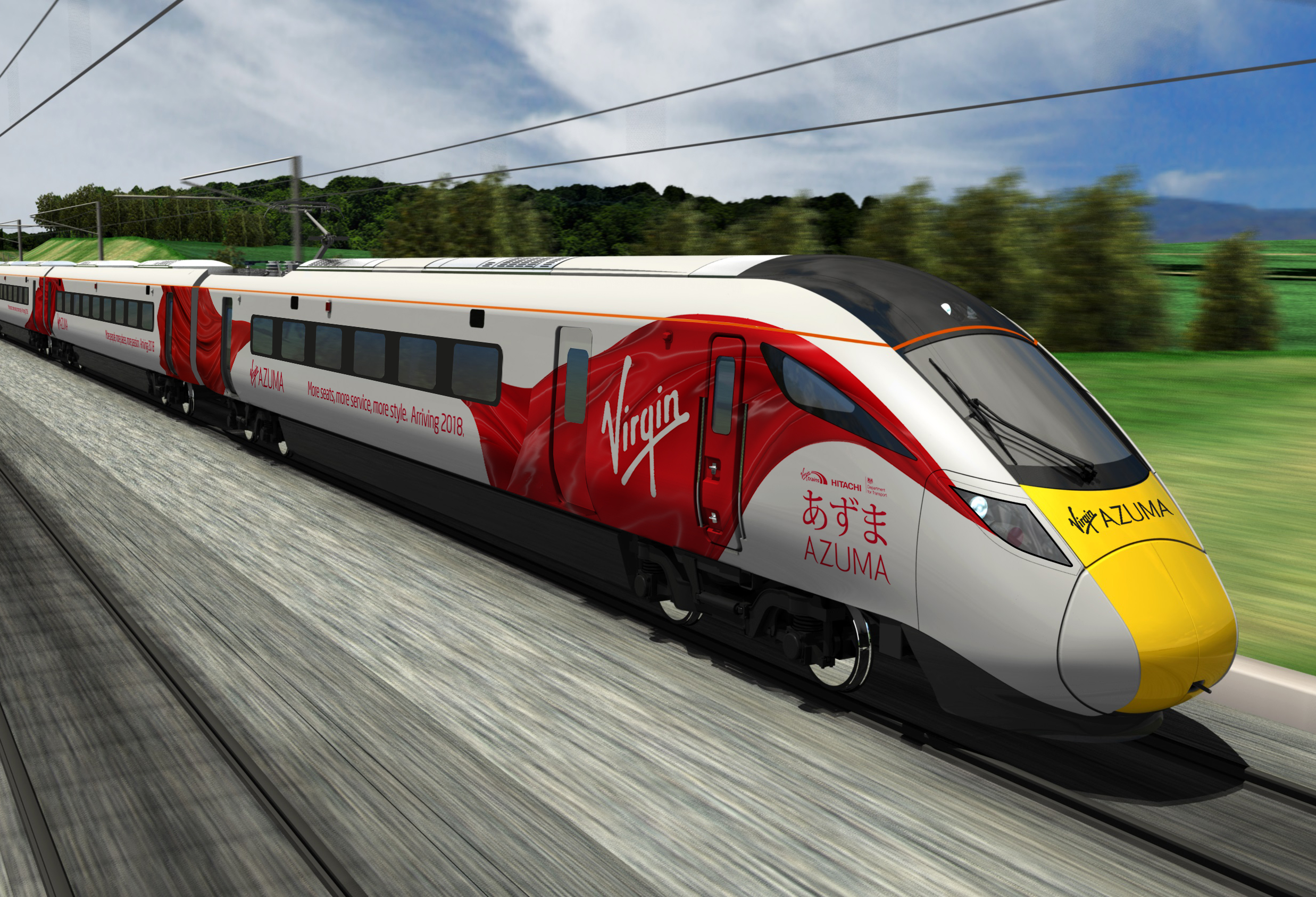 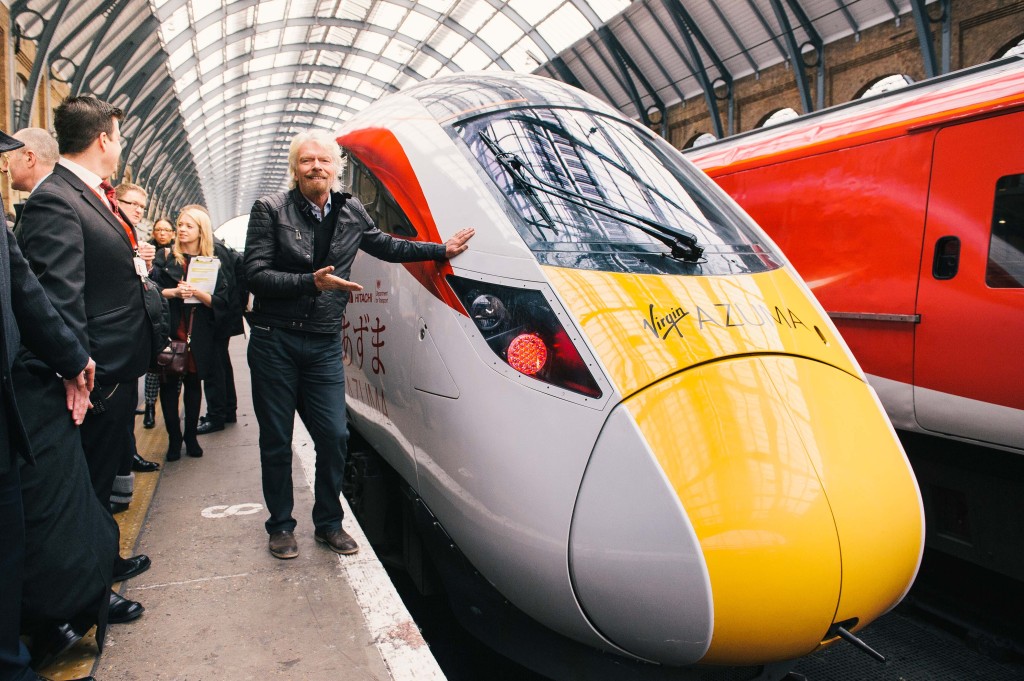 The new identity for the fleet of Hitachi Super Express units coming to the UK’s East Coast Main Line has been revealed: Virgin Azuma.

Sir Richard Branson unveiled the brand new name and livery for the units at the launch ceremony, which took place at London’s King’s Cross station earlier today (Friday 18 March). Azuma trains, literally translated as ‘East’ in Japanese, will hit the rails of the ECML from 2018, and in addition to looking radically different from anything on the line will bring a whole raft of improvements along with them.

The Azumas will bring journey times between London and Edinburgh down to 4 hours, and London – Leeds down to 2 hours, enabling new direct routes to destinations such as Huddersfield and Middlesbrough. Easily capable of cruising at 140mph, the Azumas will initially operate at 125mph, which is the speed limit along much of the ECML. However, the Hitachi units accelerate much faster than anything else around at the moment, able to go from 0-125mph in 4 and a half minutes – almost a whole minute quicker than anything else currently in the fleet. Interestingly, Virgin took the opportunity to announce the creation of a cross-industry working group to investigate the potential for the East Coast route to enable the operation of Azumas at 140mph. 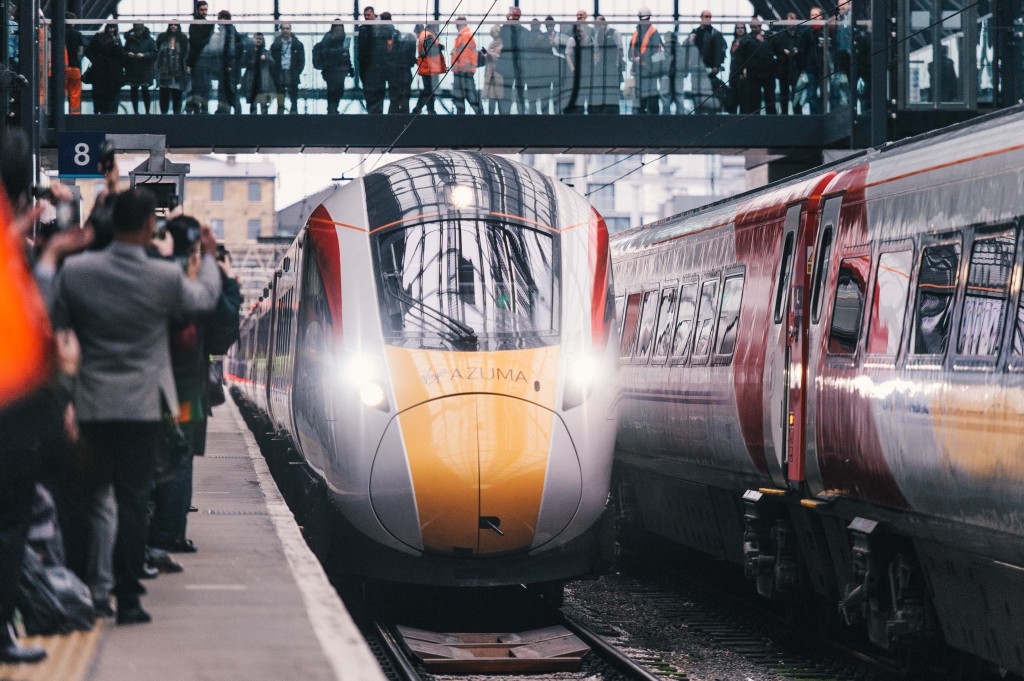 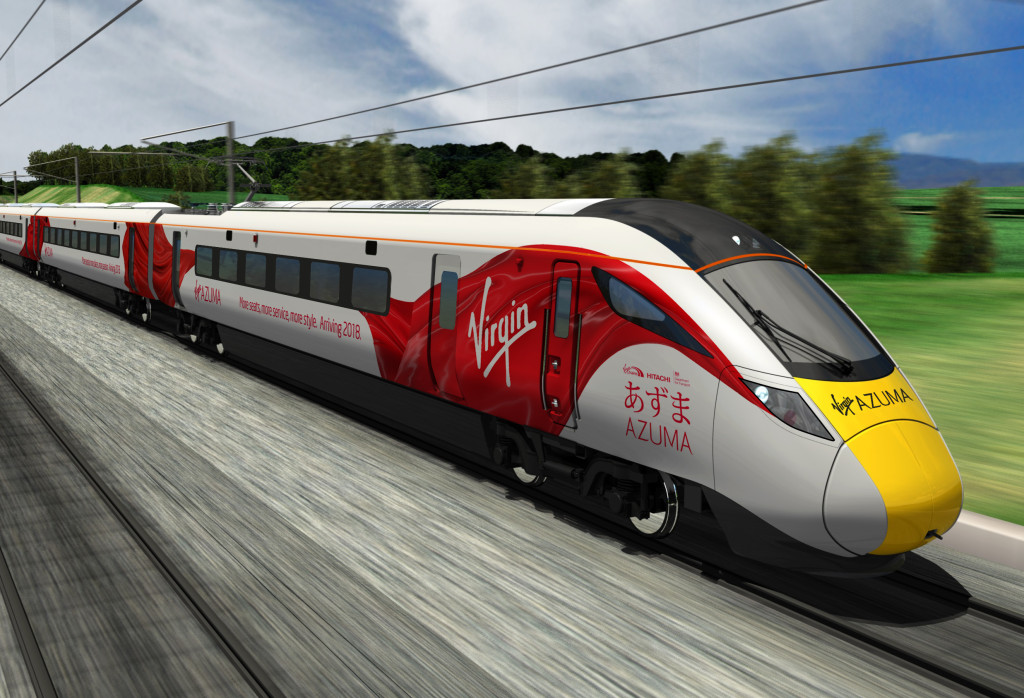 Azuma‘s bespoke livery, designed by Virgin’s in-house design team, combines a warm grey base layer with a new take on Virgin’s familiar red ‘swoosh’ elements, which have been styled with a glossy ripple effect at the ends of the train and between carriages. It’s not a world away from the Best Impressions-designed wraps applied to the existing Virgin East Coast fleet, and whilst certainly different it will feel reassuringly familiar to passengers who regularly use the route.

Interestingly, the new livery still features that ubiquitous British ‘yellow front end’, though presumably the IEP units will be equipped with European-standard forward lighting rendering the luminous nose unnecessary. Whether the yellow front end makes it into production, we’ll have to wait and see.

The new #VirginAzuma looks pretty smart, eh? Well check out how we made it look so fab!https://t.co/M6cEN6JrsZ

Atmospheric on the inside

According to Virgin, the interior of the Azuma units will have ‘that distinctive Virgin atmosphere’. Roughly translated – expect lots of red and grey, ergonomic seating, mood lighting, free on-board wifi, power sockets and an innovative ‘traffic light’ seat reservation system. The unit on display at the Azuma launch was a test train loaded with technical computer equipment rather than the real thing, but we can probably get an idea of what it’s going to look like by looking Virgin’s recent “#PlushTush” refurbishments. ‘Plush Tush’ trains feature that signature Virgin red in Standard class, with smooth Scottish leather in First infusing the new seating, carpets and tables. 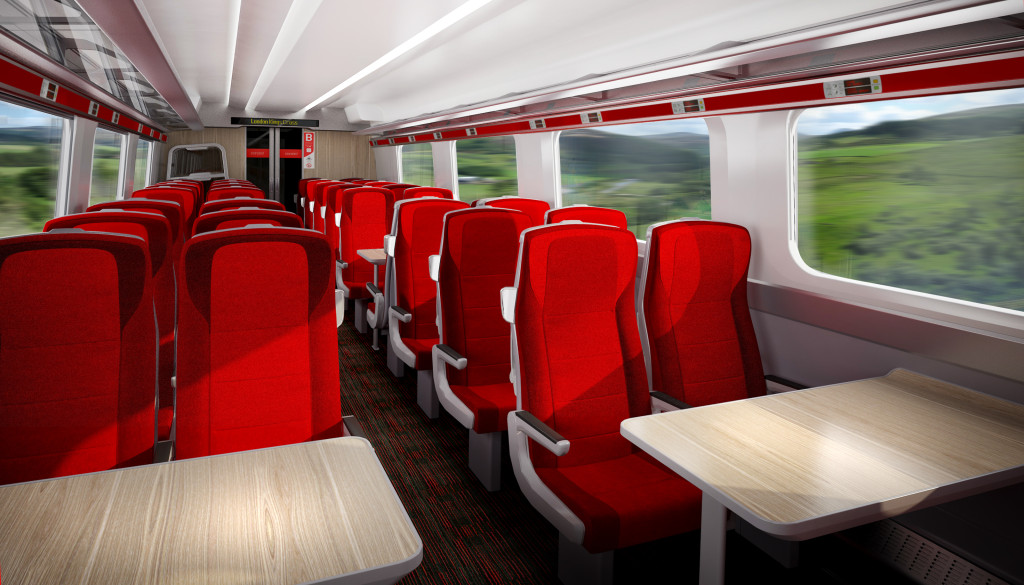 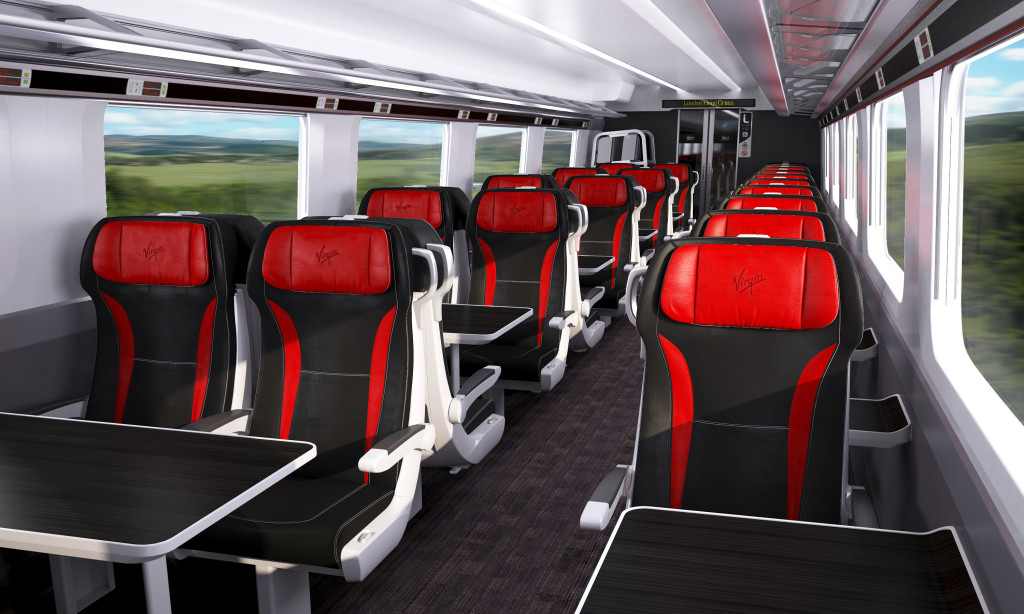 David Horne, Managing Director of Virgin Trains on the East Coast, said, “Since Virgin Trains launched services on the East Coast in 2015 we have committed more than £40m to improving our existing fleet for passengers. As part of this we’re bringing in brand new interiors with new seats in both first and standard, new carpets and mood-lighting – a first for trains in the UK. I’m delighted that today we have been able to showcase how that transformation will continue, with the first of our brand-new Azumas alongside one of our existing spruced-up fleet. We’ve already celebrated the return of the restored Flying Scotsman to the route and now we are able to celebrate the stars of tomorrow, count down to 2018, and usher in a new era for the East Coast.” 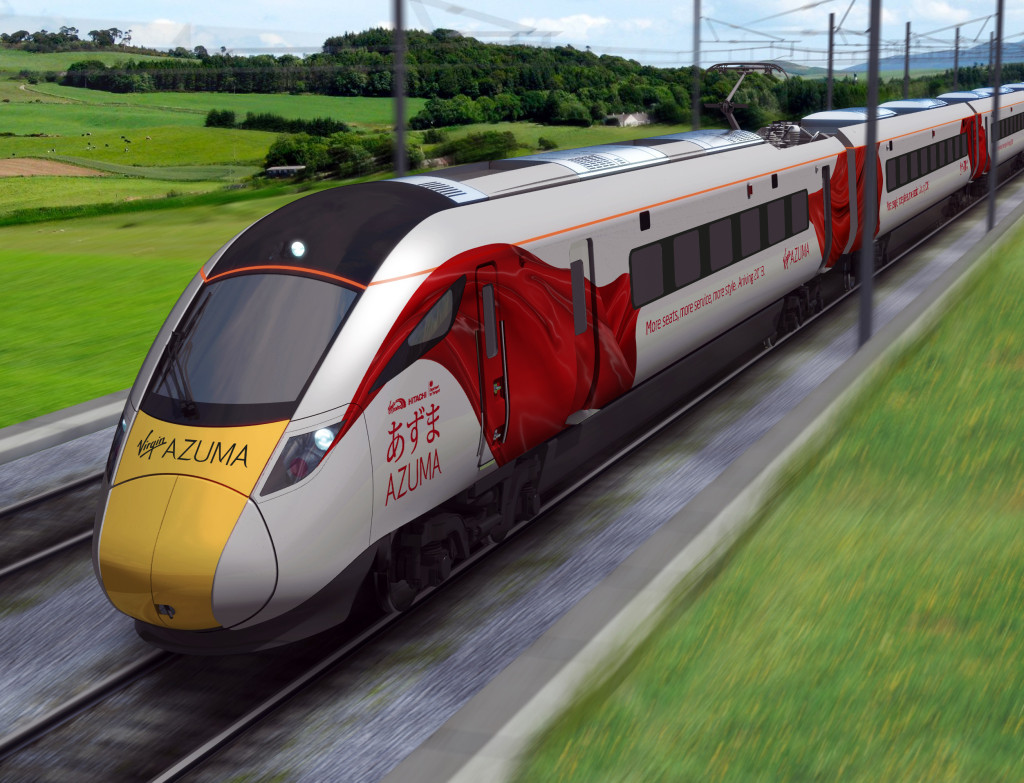 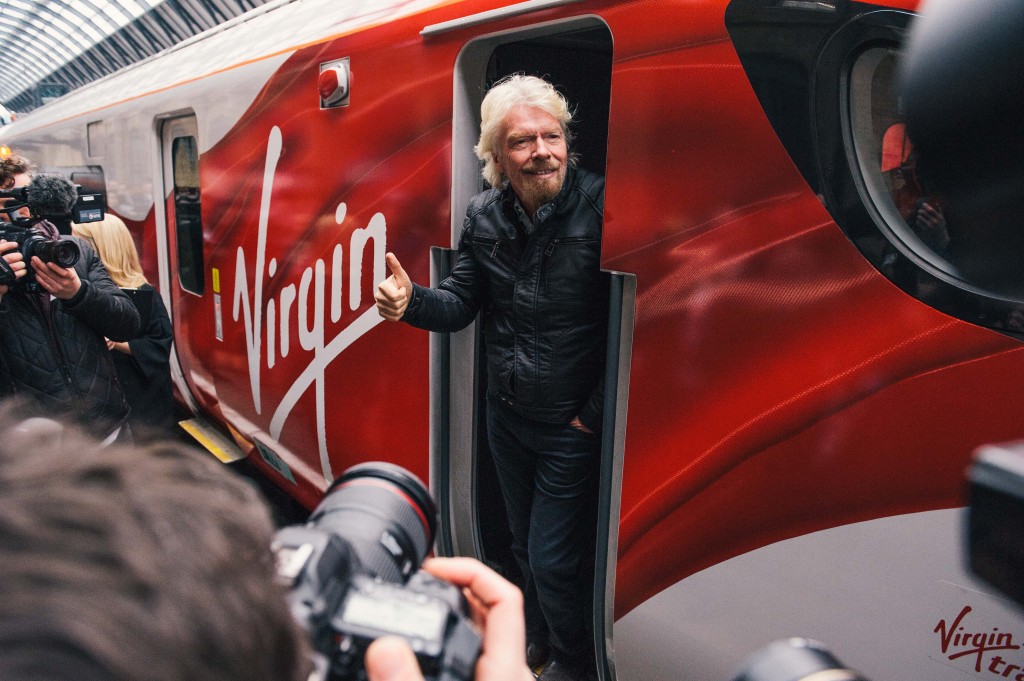 The ECML’s fleet of Hitachi Super Express units form part of the Department for Transport’s Intercity Express Programme (IEP), created to replace the UK’s ageing battalion of ‘InterCity 125’ diesel high speed trains. Included within that order were a sizeable chunk of IEP units destined for the Great Western Main Line – it remains to be seen what name operator Great Western Railway will choose for their fleet. Those destined for GWR will begin to enter service ahead of Virgin’s Azumas in 2017.

What do you think of Virgin’s new Azuma? We’d love to hear your thoughts! Write in the comments below, or drop us a tweet @transportdsn. 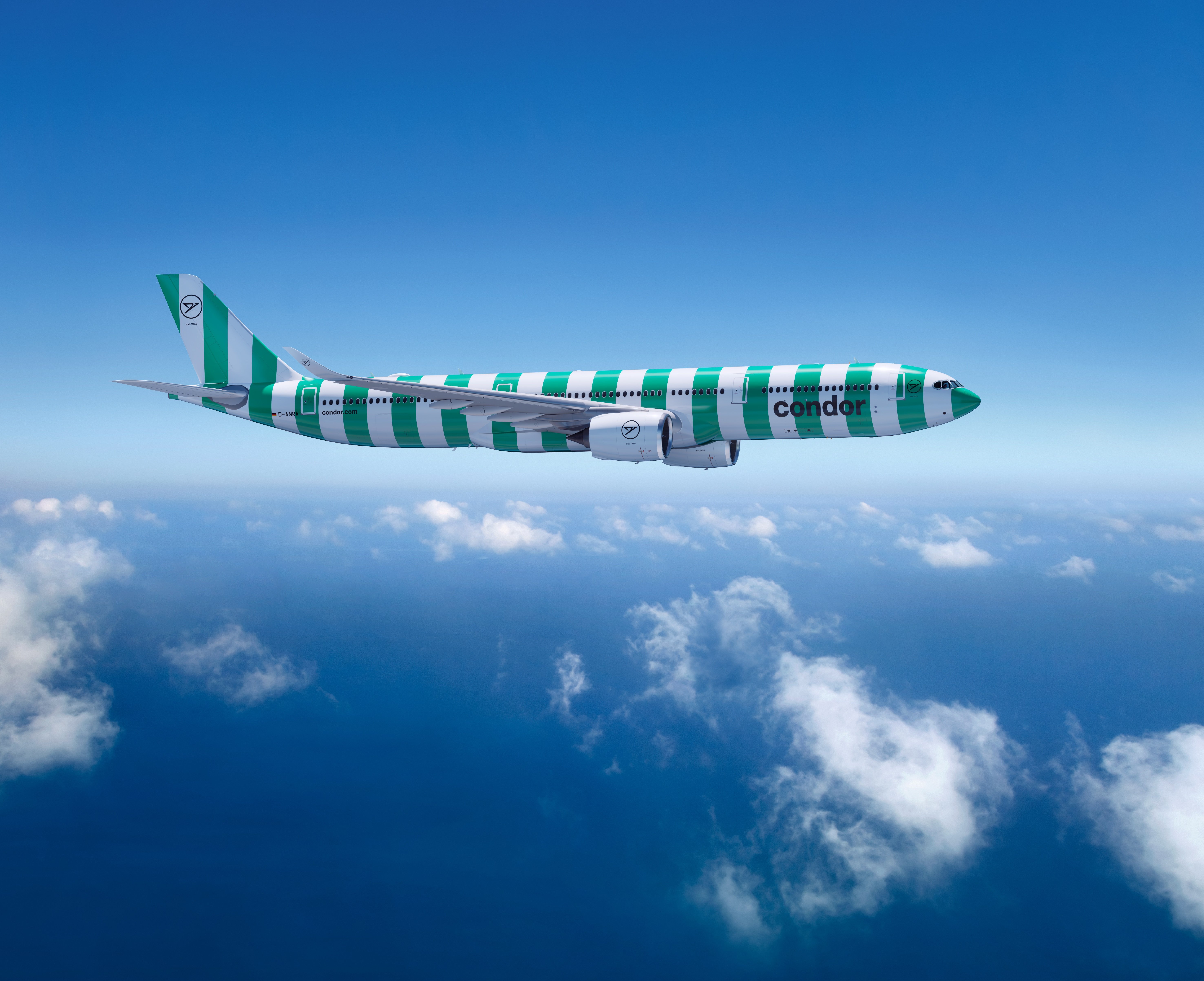