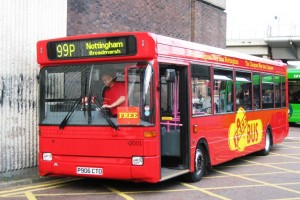 Wellglade’s cut-price’Bargain Bus’ operation in Nottingham competed in a bus war with a local independent, Premiere, who folded in January 2013 (a seperate incident). Wellglade operated bargain services under this name – and kept them separate from the premium product, Trent Barton. Bargain Bus is no longer in operation.